The Bad Angels trilogy has finally come to it's conclusion. I can't say I'm happy about that, Rex, Rion and Noemi have become such good characters to have playing around in my imagination. Seeing the final go up on the website is really very bittersweet.

After being trapped out of space and time, Dr. Noemi Gastineau finally discovers her true nature and the amazing destiny that awaits her. However, danger surrounds her on every side. It seems that a rogue angel, an insane nymph, and a wily demon would be enough for a woman to deal with for one day. Unfortunately, Azrael, the Angel of Death is now on her tail, and he's one of the good guys!

How's a succubus supposed to get any quality time with her men when the whole universe seems to be out to get her?

In the darkness, the true measure of a man or woman can be weighed.

Noemi lay on her side, curled tightly into a fetal position, allowing the other presence in her mind to run rampant, to succumb to blind panic. She refused to give Anahita a voice though. The succubus could indulge in blind panic, but not a sound left her throat. After a seemingly endless time spent buried in the darkness of an unknown cave, Noemi calmly, assertively took over, forcing the other half of her psyche to submit to her control.

She took a deep breath, and then another.

"Okay. This isn't a new situation for us. For me." She slowly relaxed her muscles, stretching out and sitting up. "In fact, compared to waking up in a glacier, this is a picnic." She opened her eyes wide, hoping to catch some vestige of light; something that would reassure her that she really, truly wasn't buried alive. The stygian blackness of the cave was unrelieved and Noemi shivered, wrapping her arms around her knees. "I guess all the years trapped in that glacier would explain why I hate getting cold."

Anahita didn't answer, and why should she? Noemi was Anahita.

That brought a slightly hysterical laugh to Noemi, and she fought the urge to curl up again like a baby in the womb. But Noemi was stronger than that. Noemi hunted and fought demons.

Noemi didn't know that I lived within her all this time!

"No, Anahita, you don't have a voice. We are the same person. I accept that, just as I accept your memories as my own."

With that admission, Noemi's mind skipped through the recent and distant past. She vividly recalled the many times she'd honed in on Rex's bright, vivid life-light, returning to feed from him again and again. She also recalled Rion's fearful reaction to her presence.

But he came back to me! Even though he doesn't remember, he knows!

Satisfaction pulsed through the succubus. Her relief was nearly painful to experience. Anahita's love for the men carried the sharp edge of desperate fear. She had pursued them relentlessly, yet sacrificed all to their wellbeing. Her greatest fear was losing them, yet she set Orion free when his fear of the succubus grew overwhelming. When he'd taken Rex to China, Anahita had stayed behind, knowing that her kind was feared and loathed within that culture. As she evaluated the shadow existence that she'd lived in the hours that Anahita controlled her life, Noemi felt some degree of pride. The succubus was anything but evil. She had evolved into a strong, ethical person, even when split from Noemi's conscious control.

Deep in the grip of memory, Noemi barely noticed when gentle light began to soften the darkness around her. Golden light laced with red glowed within the chamber, allowing her to see her prison.

In confusion, she looked around for the source of the illumination, only to discover that it came from her body.

She deliberately relaxed, letting the light swell up. Her long, straight hair suddenly seemed heavier and more luxuriant. Her dark skin had a distinctly golden gleam.

A convulsive gasp pulled through her chest, and pain blossomed deep in her back.

Wings, she thought, and they came forth. Great, black-feathered wings, edged with golden light. Noemi slowly stood and flexed those great wings, a smile lighting on her face as power and strength radiated through her body. Anahita was triumphant.

It's been so very long since I was whole.

So very long indeed. She basked in the emerging power that had been dormant for so long. Yet Noemi was still in a dangerous, uncertain situation. She paced the cave, running the last encounters with Michael, Carly and the demons through her mind.

In spite of Noemi being caught at the center of this web, she suddenly realized that this whole drama was not about her or her men. She closed her eyes, patching together a memory that was incomplete.

Michael the High Angel. She carried the memory of his cruel, beautiful face in the darkest recesses of her memory. His ambition had twisted him, he'd Fallen and no one had been the wiser. No one but her husband. Even the fall from Heaven hadn't seared Michael's betrayal from her mind. He'd hated Kokabiel, God's Star. He'd envied him his voice, and the respect that he'd earned among their people. When Kokabiel had confronted Michael with his treachery, the High Angel had framed him, tried him, and had his voice burned away so that he couldn't speak in his own defense.

Yet this scenario was not about Kokabiel. She wondered if Michael was even aware that Kokabiel lived on in Orion Hunter.

She sat on a rock and massaged her temples, sorting through the tangled web of her memory.

She could barely bring his image to mind. He was dark, but unlike her his skin was fair, his eyes the deepest blue. She'd encountered him when she had first escaped from the glacier. In later years she'd been his quarry, but had seen him only from a distance, and in his human disguise.

Unlike the other angels on Earth, he'd never Fallen. He'd been sent. Unlike her and Rion, he could go home. Which meant that he could tell the people at home of Michael's true nature, if he was even aware of it. If he cared.

She swallowed, a slow, sick feeling sliding through her belly. Carly had been protecting Patrick. Carly hadn't ruptured the membrane of Noemi's memory through jealousy and spite. She'd been blackmailed... forced.

"Patrick. Azrael." She stood and paced. "Carly loves Patrick. Michael needs to destroy him to protect himself. Azrael hasn't a clue of the danger that he's in!"

Sudden, urgent fear laced through Noemi, and panic began to tease at the edges of her consciousness.

When the pieces of the puzzle fell into place, Noemi staggered, one hand bracing her trembling body against the wall of the cave.

When a dark, burning light overtook and consumed her own golden glow, Noemi's heart froze in her chest. 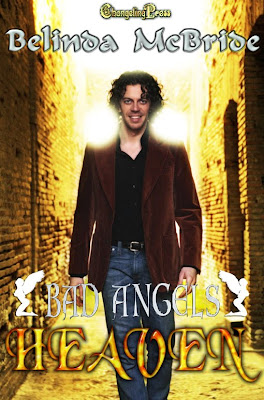 Is this not just the coolest cover? I tell you, finding Rex out there in picture land wasn't an easy task, but look, there he is!