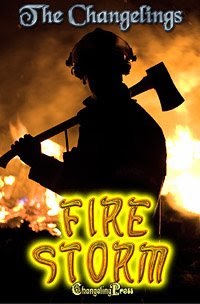 If you look down further on my blog, you'll see some photos of the fires that burned with such devastation here in California. What's that got to do with writing, you ask?

I want to tell you about a special new anthology coming from Changeling Press. Its called Fire Storm, and all the stories are related to fire, fire elementals, and shifters. Remember a few months back when there was flooding in the east and fire in the west? Well, I was unfortunate enough to be right in the middle of a circle of some of California's worst fires. We got to talking and decided to do this anthology specifically to benefit national disaster relief organizations. I'm really proud that my story, Cougar Meadow, was selected to be part of this anthology.
http://www.changelingpress.com/product.php?&upt=book&ubid=1001

A collection of short Paranormal Erotic Adventures from the Changeling Press family of authors. Royalties to be donated to National Disaster Relief efforts.
Catan’s Fire -- Jade Buchanan: Asad needs to teach his mate what happens to submissive Felidae who disobey orders. This is one lesson Catan will never forget!
Brimstone by Mistake -- Alice Gaines: Lucifer has grown tired of processing soul after soul through hell -- until Sally Upshaw appears unannounced. The little temptress turns him on as no other woman ever has. The problem… Heaven's made a mistake. What will Lucifer do when the Man Upstairs wants Sally back?
Shifting Priorities -- Anne Kane: Solar flares have sparked random wildfires amongst the out-ports, and stationmaster Tome Rimmer forbids females to travel alone -- a decision that doesn't sit well with Jexx. Her battle implants more than compensate for her gender. But when the sexy hunk she picks up in the station bar turns out to be more than human, she has more important things to worry about than her profit margin.
Wolf Style -- B.J. McCall: When a wolf races out of the flames and straight into Volunteer Firefighter Matt Reynolds’ arms, he has no idea how his life is about to change.
Cougar Meadow -- Belinda McBride: When firefighter Ellie Cameron is separated from her crew and trapped in a firestorm, the last thing she expects is to be rescued -- by a shapeshifting mountain lion who awakens the heat buried within her -- and the need to mate.
Going Somewhere -- Cameo Brown: Leonora Palmer, an undercover arson investigator, gets an unexpected lesson in desire when the mysterious owner of a wild animal sanctuary catches her snooping in his garden and gives her no choice but to surrender to his primal needs.
Burning Down the House -- Isabella Jordan: Katurah has always had the ability to start fires with her mind. Will she use her powers now to end it all -- or will she give in to a fiery lover?
Stockings -- Jade Buchanan: What do you get when you throw a gorgeous female cat shifter, an enticing pair of stockings, and a very interested lady wolf into the mix? Enough heat to burn down the house...
Fire Thief -- Jordan Castillo Price: A glittery glam rock waif and a tattooed existentialist duck into a closet behind the bar. It’s just another gritty, anonymous, gay encounter in the dark…Isn’t it?
Britta's Beast -- Kate Hill: When Max and Britta met at a convention for members of magical law enforcement, they seemed like a perfect fit. But Max believes women should raise the family while men do the protecting. Problem. Britta’s a Valkyrie, and that’s just not her style. Time for the centuries old cat to learn a few new tricks -- before his lover takes wing.
Firehorse -- Mary Winter: When wildfires threaten a Nevada wild horse sanctuary, photographer Billie Mote takes one chance too many and finds herself needing rescue -- from a man who teaches her that there’s only one thing that burns hotter than the wildfire outside, and that’s the passion between them.
Mating Fever -- Selena Illyria:The moons are full, and Courtney's trapped with Devin Langley -- the man of her dreams. It's mating season for cat shifters, and she’s in heat. Perfect opportunity. The only problem -- she's been promised to another man.

Be sure to check out this great collection!
http://www.belindamcbride.com/
Posted by Belinda M. at 9:15 PM No comments: 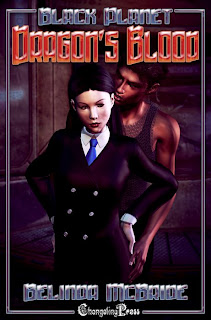 It's always so much fun when a book releases...all that hard work and angst finally comes to fruition. Dragon's Blood is no different, its a book that in many ways came easy to me. In fact, much of the story came to me as I sat in the chair at the blood center, making my regular donation. But still, I worried about this one...will readers understand the cultural references that play such an important part of the story? Will they accept the racial differences between the hero and heroine?

Yes, blood plays a major role in the story, or rather, a creature that craves blood. A vampire? Maybe. A monster? Absolutely. And what exactly is "Dragon's Blood?" No, its not a mythical creature, but rather an insidious disease that kills randomly.

In my opinion, this is probably my best book (thus far!) and I'm really quite proud of it. So read on for a blurb and a racy excerpt about Annie Tanaka and Aiden Chen, the newest heros in the world of the Black Planet.

While this story isn't a sequel to Little Dragon, it takes place in the same universe, but in a different time. You will find some similarities, the Nephris are mentioned, and we meet the Thalians for the first time. And Grandfather Guo Lee makes an appearance...
And by the way, I'm celebrating the release of the book with a contest, read on, and then visit www.belindamcbride.com for details!

Content Warning: Contains sexual situations, which may offend some readers.

* * * *
BLURB:
San Francisco, 2183 CESan Francisco was never the same after the Great Shake of ‘08. On the ruins of Fisherman’s Wharf, a ramshackle city rose like a mushroom, a strange dichotomy of safety and corruption. In this forbidden city, a monster prowls the corridors and alleys, seeking the nanite-enhanced flesh and blood of underground cage fighters.
Detective Annie Tanaka once survived an encounter with the monster. The attack left her clinging to life and riddled with fear. Now the monster has returned, and is hunting in her territory. She will need every weapon in her arsenal to face this enemy and prevail.
Unfortunately for Annie, her partner hates her and is next on the monster’s menu. And Annie’s mentor is a legendary fight master who hasn’t been seen in decades.
As she closes in on the creature, Annie Tanaka quickly discovers that her real enemy isn’t the monster, but her own fear. And against that fear, Annie must stand alone.
Note: The events in this story take place thirty years prior to Little Dragon.

She pushed back, standing, and unbelted his robe, letting it fall away from his body. He was muscular but lean. It amazed her that this beautiful body of his took so much punishment. There was a small scar over his hip; that had come from a domestic disturbance call. The victim had suddenly turned on her rescuers, attacking Annie with a knife as she cuffed the woman’s drunken husband. Aiden had saved her life that night, intercepting the attack, getting cut himself.

She surveyed his body, seeing the small scars of youth and childhood, but nothing newer. Nothing recent to mark the ugly turn his life had taken. His cock rose long and dark from a thatch of black hair, his balls dropped heavily beneath the shaft. Annie carefully drew his legs apart and knelt between them, exquisitely aware of the supplicant posture she assumed.

Aiden’s body grew rigid, his dark eyes fairly blazed with heat. When she took his shaft in hand, he shivered.

“My God, Annie!” He jumped when her mouth slid over the head of his cock. Inwardly, Annie smiled. She was in the pose of submission, but held all the power at this moment.

He was big, bigger than she could comfortably take in, so Annie clasped his shaft, giving long, smooth strokes as she suckled and licked at the head of his cock. She tasted the salty tang of pre-come, smelled the musk of his arousal as he became more excited. Aiden slid forward in the hard wooden chair, giving her more access to his body.

Annie fondled his balls with her free hand, teasing up behind the delicate orbs, the tips of her fingers pressing his anus. He flinched, and gasped, and she pulled her head back, looking up at him.

“Is this okay?” The tip of her finger pressed in a tiny bit, playing with that tight circle of muscle. He nodded.

“Not too much though, just there…“ His words trailed off on a sigh as she pressed a moist finger to his back entrance, her mouth returning to his balls. Annie felt his muscles contract on her finger rhythmically, his balls began to grow tight to his body. Annie looked up, the expression on his face made her heart stand still. Lust and want, certainly, but a look of wonderment and love had settled over his face. Love for her.