Onions and Apples - Your Supporting Cast 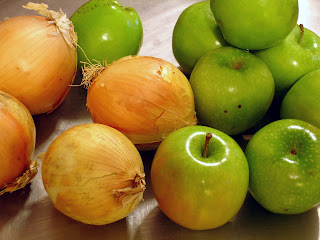 Apples.
They're one color on the outside, another on the inside. They can be red, pink, yellow, green or parti-colored. Inside, their pale flesh is sweet, tart, mushy, crisp or sour. In essence, one apple has three major characteristics. Their taste, texture and how they look.
I like apples, but a lot of the time, I really want to dip them in something like caramel or peanut butter.

Onions.
White, yellow, green, purple. They have a thin skin and thick layers. And they generally have a distinct flavor that says "onion." They can be raw, sauteed, minced with celery and carrot, fried and caramelized.
I don't always like them. Unless they're battered and deep-fried, they aren't a very tasty snack.

One of these foods is a complex staple of everyday cooking, and it's not the the apple.

I tend to look at characters and compare them to onions rather than apples. Much as I like apples, they're a little a bit simple. (remember, I"m not a cook.) Onions are formed in layers. Peel back one and you get another...over and over again. An accomplished chef can integrate an onion into every course of a meal, including dessert. The characters in your books should be like that. Not just your lead characters, but the supporting cast of your book. The villain, the best friend, or the supportive parent.

I can't count the number of times I've read interviews where the author focuses 99% of their effort on the hero, and then they slap the heroine into the book, making her a weak reflection of her love interest. I also lose count of the flat, two dimensional cast walking in and out of books. I hate when the supporting cast,  is a trope or a stereotype. Its a mortal sin when the villain is that way too.

Look around you. Pay attention to the people wandering in and out of your daily life. A couple days ago, two women came into the laundromat when I was doing the family wash. One woman was elderly. Her neatly styled hair was silver. She wore blue jeans, a denim jacket and a jaunty little visor. Her companion was younger, gruff looking and a little sloppy. I assumed they were friends but it turned out they were mother and daughter and lived together.

As they did their folding, an old primer-coated muscle car roared into the parking lot; it was clearly in a state of restoration, and both ladies looked out the window at the car.
"Look at that old Trans Am, Mom."
The older woman got up and walked out the door, peering at the car. She came back in and sat down. "That's not a Trans Am, its a Camero. Remember, the Trans Am had this flare to the fenders..." She broke down differences in the two car makes. By year. I was listening...thinking...'Dayum!' That was impressive. All I know is that the Trans Am usually had a bird painted on the hood.

I was walking in a shopping center and an older gentleman crossed my path and entered the cigarette store. I went into a sandwich shop and a few moments later he came in and studied the menu. He was the kind of man that puts me a little on edge, older, clothing a bit run down and he had an attitude that made me a bit nervous. I summed him up as a Viet Nam vet who never reintegrated.
He seemed like the sort of guy who chain-smoked in a dive bar, then shot up speed-balls when he was alone.
The clerk greeted him.
"Hi!"
His response: "Not yet. Not for a few days." He laughed, but the kid didn't. I was wondering how fast I could get out of there.
He ordered a sandwich and as he ate, the man pulled out a cell phone and spent the next half hour calling person after person. He was catching up with friends: "You still ride? Yeah we're going out this weekend."
I was pretty sure he wasn't talking horses.
"No, she's not doing so well. I heard she was taking care of Betty, then got sick herself. No, there's not many of us left."
"Just calling to check in on you. Yeah, I'm moving to Shasta Lake City. Gonna start looking for a roommate next week. So, you need anything?"
"Well, if you need a ride, give me a call. You've got my phone number."

Every call he made was an offer of help. This man I assumed was an old, hard junkie was calling his friends, making sure everyone was doing all right. He might have been exactly what he seemed to be, but he was a heck of a lot more.

Everyone you meet is far more than the sum of their parts. The young woman who's a dead ringer for that Zoey actress goes to school full time. That's not a surprise. But she also works two jobs and sometimes sleeps in her car. The young man in the fast food restaurant looks like he lives at home with Mom and Dad, but he's taken this as a second job to pay for his son's medical bills. His young wife drives the baby 150 miles to UC Davis every week.

See that scrubby old man who comes into the local greasy spoon every week? He's a world famous, Grammy winning singer and songwriter. That super-hot guy who lives in the studio apartment? He's got severe brain damage. If he looks away, he won't remember you, but can fix your car and discuss astronomy.

Look around. Listen. These are the people who are waiting to walk onto the pages of your books. You don't need to resort to stereotypes and predictable characters to build your supporting cast. Every person in your book has their own history, their own loves, hates, secrets and addictions. Layer your characters. You don't need to put everything on the page, but the more you know, the more that best friend will mesh with your hero. Give your villain passion and love and complexity, and he or she will trigger fear and dread and reluctant compassion in the reader. Make your heroine the counterpart to the hero, not a cipher.

Belinda
Posted by Belinda M. at 9:32 AM No comments: