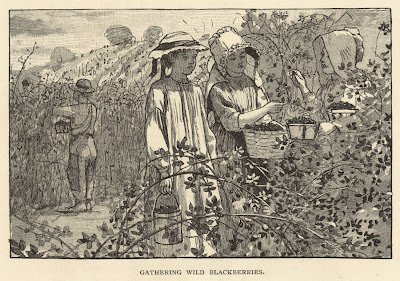 Here it is, August in Northern California. Whew...we seem to have survived an extended heat wave without too much suffering. It's hot, make no mistake...but the swamp coolers are doing their job fairly well this year.

One of the victims of our hot spring and summer were our wild blackberry vines. There's a big patch in the middle of my dog yard, and another by the creek that borders our property. This year, they didn't do so well. The berries that grew were puny and dry and extra difficult to harvest. Last year we had milder weather and the harvest was amazing! It had been quite awhile since they were so lovely.

While I was coming home from a dog show a few weeks ago, I stopped by Pedrick's Produce Stand (Just to the west of Davis, CA) and to my delight, they had some locally farmed berries. They were huge, luscious and perfectly ripe. I bought a half-flat and rushed them hope, tossing them in the freezer till I have time to make jam. Of course, we enjoyed a few handfuls, marveling at how perfectly sweet they were.

Of course, I'm never one to leave good enough alone, so I decided I'd put on my jeans and boots and check out what the creek vines were doing. After wading through knee-high stickers and overgrown berry brambles (bad me for letting it get out of control!) I discovered that there were a few really nice berries, but the effort to pick them was just not worth it. 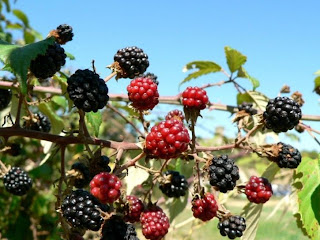 Well, it wasn't until I popped one in my mouth.
Wow.

The lovely farmed berries just don't hold a candle to the wild berries that struggle though barren soil, blazing heat and limited water. They were tart but sweet, and the flavor was intense. I gathered all I could, little more than a cup or two, but I had to make the effort. Because who needs tame when there's wild?

When I finally finish my current project, I'll bring all the berries out of the freezer and I'll make my berry jam for the year. Yes, the farmed berries are a little dignified and mellow, but you know, a handful of wild will shake up their flavor just enough.

All winter, we'll use the jam I make and once again, I'll remember that doing it the easy way just doesn't pay the same rewards in the end. I might get hot and sweaty, scratched up and full of stickers, but that little bit of wild will remind me that a bit of extra effort makes a whole lot of difference. :)