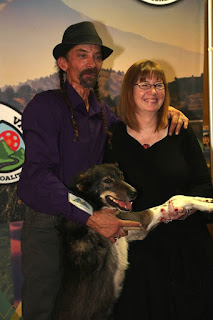 There's been a lot of discussion about what makes a book or movie or song "Inspirational." To me, it has little to do with religion, but more with the uplifting nature of the work. I recently saw the award winning film The Great Alone, which is about the life of musher Lance Mackey. It's billed as a sports documentary, but is so, so much more.

This movie totally hits the mark for defining Inspirational. Lance was born to a legendary racing family in Alaska. After his parents split, he became mired in substance abuse by the age of nine. That's right...nine. He pulled himself from that hole, straightened out his life and decided to follow the family tradition of sled racing and eventually entered the Iditarod.

And then the cancer came.

The story of his life is inspirational. Lance entered the race again, while he was still being treated for throat cancer. He scratched when the contents of  his feeding tube kept freezing. Yes, he ran 500 miles of a thousand mile race while on a feeding tube.

Eventually, he went on to win the Iditarod. Then he won it again. And again. And again.
He also won the Yukon Quest 4 times, garnering awards for the excellent care of his animals and for having the most valuable team on the trail. He was given the title of "World's Toughest Athlete." Its unlikely that some of his accomplishments will ever be repeated.

He's battered, scarred and torn apart from the cancer and the subsequent treatment. He lost his salivary glands and eventually his teeth. His voice is gravelly. The bones in his jaw eroded. He had a finger amputated because of unrelenting nerve pain. His eyes are often reddened from the medical marijuana he uses to ease his pain. He can't use that when he races. But he still races.

He can't raise his arm over his head, because it might put enough stress on his jugular to tear the artery.

He has Reynaud's Syndrome, which causes his extremities to lose circulation and freeze easily.

And he's never given up. Never quit. When someone tells him he can't do something, Lance says, "Watch. This."
In all the years he's run those major races, he's never had a major corporate sponsor. He's funded by small businesses, friends and fans.

And the driving force in his life is the well being of his dogs. You wonder why I idolize this guy?
There's a reason that "Superman Wears Lance Mackey Pajamas."

This movie is what inspirational storytelling is all about. There's no mention of God or religion in this film, just a man, a second chance and a love of nature, mushing and his dogs. This is a man who's faced impossible challenges again and again, and prevailed. Lance is perfectly imperfect. He screws up, falls down and gets back on his feet. He knows the meaning of his life. How many of us can say the same?

The Great Alone is a tour de force directed by Greg Kohs. It's shot in a remote, hostile environment. The cinematography is exquisite. The soundtrack is gripping and ethereal. The story-telling is seamless. This is a story about a man, a race, his family and his dogs. In Lance's words: Watch this.

The Great Alone is currently on the festival circuit, and will go into general release in 2016. See their  Facebook Page for screenings and guest appearances by Lance, his dog Amp and various guests.


Livestrong Video: Lance
Posted by Belinda M. at 1:41 AM 1 comment: