The Legend of Hermaphroditus and Salmacis 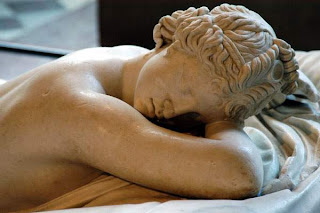 I learned something last night.

Well, I probably already knew it, but over the years, too many stories and myths get muddled up in my brain and this struck me. I was doing some research for an upcoming novella, that revolves around Greek mythological characters. In particular, I was looking at Hermes, best known as the messenger of the gods.However, Hermes was also a fertility god, and and in a sense, he was the male equivalent of Aphrodite. In fact, they got together and made some whoopee, which resulted in a son so beautiful and perfect...so much like his parents, he was named for them: Hermaphroditus.

Hermaphroditus lived a normal young godly life until the age of 15, when he ventured out to see the world. At some point, he found a clear pool of water protected by a naiad named Salmacis. The moment she saw young Hermaphroditus, Salmacis fell desperately in love. She attempted to seduce him, and when that failed, she distinguished herself as one of the only known naiads to attempt a rape. As she wrestled with the boy, she prayed to never be parted from him. In classic…’be careful what you wish for’ fashion, Salmacis and Hermaphroditus were melded into one person, who was both male and female. Stunned and ashamed, Hermaphroditus cursed Salmacis' pool, so any man who bathed there took female traits. (Ranma 1/2, anyone?) He then became the god of effeminate men.

As I did a Google search for images, I was stunned at some of the beautiful artwork depicting Hermaphroditus, particularly the sculptures.He was portrayed as beautiful, yet strong and powerful. Exactly as I envisioned my Valorans.

Why this hit me is because in all the research I did for the Valorans of the Coalition Universe, particularly Afton Teris in The Bacchi, I never thought about looking into Greek mythology. I looked at historical accounts, science, documentaries, and even drew on my friendship with an intersexed girl when I was growing up.  But I never looked into the origin of the word, which would have undoubtedly led to further development in the species.

So maybe in future Coalition books, I might have to look a little closer at the legend of Hermaphroditus and Salmacis, and perhaps integrate it into the origin myths of the Valoran. Of course, that means another Uncommon book...or maybe another Belle Starr...