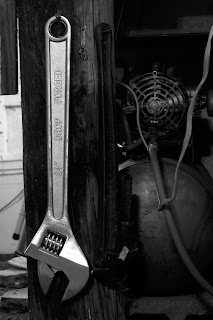 I stood under the watery light of the bathroom, staring at myself in the mirror. My short black hair was a useless mess. Dark circles stood out under my deep black eyes.
Holy Crap!
There were bite marks on my neck; bruises on my wrists.
Upstairs, the phone rang. It was my sister Dru, calling to remind me that I'm supposed to talk to my father or something. I fisted my hands, cracking my grease-stained knuckles.
Looking back at my image in the mirror, I cursed again. I'd never get a comb through that mess.I didn't even have a comb.
Fuck it.
I picked up the razor, buzzed it all off.
Then I went back to bed, where a tall blue-eyed vamp was still asleep.
He doesn't sparkle.

May 22 would have been the 82nd birthday of Harvey Milk. At the time he was assassinated in 1978, I was nineteen years old, and living in Provo, Utah.

Harvey managed to enter the consciousness of even the most righteous of the young BYU students that surrounded me. It wasn't a homophobic thing...not really. It was actually Anita Bryant who thrust Milk into the attention of Provo society. There was a small cluster of GLBTQ people living there, and since I worked in a dance club, I knew many of those kids. On Sunday, I went to church with other upright young Mormons who went to Salt Lake City to cut loose and often cross-dress. (that was a big one) Being from California, I never fit into that world and eventually returned home, to the land of nuts and fruits and...people who were less afraid of facing the reality of who they were.

Anyhow, Anita Bryant's level of weirdness and cruelty shocked even the Utah Mormons back then and when Milk was killed by Dan White, we were all horrified. It was the beginning of greater awareness for many of us, including me. The man I was dating and would marry was bisexual, and literally tortured by the guilt he carried for those feelings. Our marriage didn't last, but his guilt did; at times he'd revel in his sexuality. At others, it bothered him deeply. It was sad to watch, even after we split.

So back to Harvey Milk. Yesterday was his birthday and with all the homophobic crap being preached from pulpits these days, I made a donation to the Harvey Milk Foundation in the name of Pastor Worley, of North Carolina. He advocates putting all gays and lesbians into concentration camps till they die out. Hopefully, his heart will be touched, and he'll repent of his hatred when he starts receiving emails from the Harvey Milk Foundation, as well as other organizations that support equality.

To find out more about this Wickedly Beautiful Response to evangelical hatred, visit this website: http://www.thegodarticle.com/15/post/2012/05/a-sinfully-beautiful-response-to-ncs-latest-gay-bashing-minister.html


This is what Anne Kronenberg said about Harvey Milk: "What set Harvey apart from you or me was that he was a visionary. He imagined a righteous world inside his head and then he set about to create it for real, for all of us."

You know, thinking of Harvey makes me happy. I listen to his voice in the speech in the above video and it breaks my heart a little, but in a good way. He was optimistic in the face of terrible odds. I don't ever remember seeing a news clip of him when he wasn't full of joy and warmth and humor.

So I just want to say, Happy Birthday, Harvey! We miss you so much!