There Are Gods Among Us! 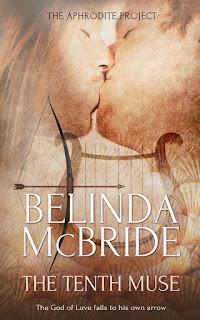 The Tenth Muse is now available to pre-order at Pride Publishing! You can order both the e-book and the paperback early, right here:

The Aphrodite Project is a brand new series at a brand new (to me) publisher! This series is a contemporary fantasy, where we follow the adventures of young Greek gods and Aphrodite's attempts to keep them from exposing the existence of the Pantheon to unsuspecting humans. This first case is all about her own son, Eros:

In a wicked game, the God of Love falls to his own arrow, and a gentle scholar learns how dangerous knowledge can be.
Aphrodite has had it.
It was bad enough that her son Eros walked a fashion show in drag, but did he really have to show the entire world his wings? Desperate to rein in the impulsive young god, she recruits the scholarly muse Rees to lure him back to Olympus until the scandal dies down.
After hundreds of years, Eros has finally located the reincarnation of his former love, Psyche. The only way to her heart is through fame, so the God of Love plans a daring campaign to win her back. Yet the closer he gets to Psyche, the more he’s drawn to a geeky young professor who came crashing into his life.
Eros drags Rees into his wicked world of high fashion and risqué parties, only to expose him to danger from an unexpected source. When Rees’ secrets come out, they threaten to destroy Eros’ love for him. Yet when Rees is kidnapped, Eros is forced to turn to the woman who set this catastrophe in motion—his mother, Aphrodite.
Reader Advisory: This book contains some scenes of kidnapping/captivity and graphic scenes of death and violence. This book also contains references to/discussions of rape.

For contests, unique excerpts and the latest news, sign up for my newsletter at: