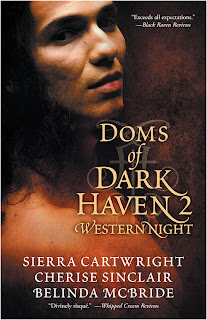 ...a print copy of Doms of Dark Haven: Western Night...signed by all three authors...!!!

Do you have any clue how difficult it was to get all three of us to sign a copy of the book? Cherise and I live fairly close together, but Sierra...dang, that woman is hard to track down!

So here's the deal, you come here to the blog and leave me a comment, and around midnight (Pacific Time) I'll draw a random winner. Not much time to participate, so be sure to get in there with your comment!

So. I know you're wondering, how did the Doms of Dark Haven series come about? Well, it was nearly an accident. I live way north in California, and one day Loose Id authors were guesting at Coffee Time Romance. I got a message from this Cherise woman asking where in Nor Cal did I live. Well, it turned out we lived quite close (in California terms) so we did lunch at Chevy's Mexican Restaurant.

Well, Cherise and I hit it off and as we chatted, she mentioned that she's love to take a trip to San Francisco to visit the Citadel. Well...I had no clue what the Citadel was, but I blurted out, "I'll go with you."

So you need to know a couple things about me. I'm not into crowds. I'm not into clubs. I really don't like dark, crowded clubs with loud music. Throw in some screaming and I'm ready to bolt. (remember that fact...)

We go and I have to confess, it was fascinating. We went to the Master's Den which is a male Dom/female submissive night, and I was told I needed to at least pay lip service to the male dominants by not going in too butch (if you know how I dress, you're now laughing) so I wore a black dress and boots. Something else, I'm sure. Some sort of shawl or something cause I'm a woman of a certain age and weight...*ahem* So I tried.

And you know, it was really cool. People were really friendly, no one jumped my case over the occasional faux pas and when we left, we were both totally buzzed. So of course, someone says, "we should write about this" and the other says, "yeah, we should" and in my bipolar haze, I babbled all the way home. We took some notes, made some plans and Doms of Dark Haven began to take shape. Loose Id was interested and then Sierra came onboard to make it a cozy threesome. So the theme emerged: Three women, one night. A Victorian costume night. There was only one problem. We agreed to write in our own genres.

I write paranormal. You try integrating werewolves in with two contemporary/suspense stories. No matter how I whined, they insisted. Do you have any idea how subs can bully you around? Sheesh.

So I recalled my first reaction to the club, walking in, parting the curtain and being assailed by sounds, smells and the vibrations of music. Then the colors, the milling bodies and just the sense of being somewhere where the tension was so incredibly thick. I thought about having a werewolf walk unprepared into that setting, and Evangeline Jones took shape in my imagination. And she was so fun to play with!

So that's my version of the backstory about how DODH came to be. Of course, Cherise might tell you something different, maybe about how I jumped naked into the swinging chain bed or how I chased some poor dom around the room, crying out, "Master...please..."

But she'd be lying. Really.

OK, I just had the sudden realisation....my birthday is coming...soon! EEK! (I'm at that age where its a bit...ahh...traumatic.)

So this year I have swag, I have books, I just have a lot of stuff to give away. It'll all start on March 1, so be sure to check in every day, because you won't want to miss what I have! A prize a day, so don't miss it! I have stuff from:

As well as great swag I generally reserve for special occasions.

Plus I'll be posting excerpts and trivia from past and upcoming releases. 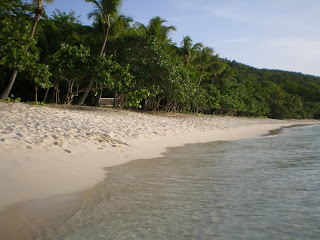 As writers, we all experience the "so you're a writer...I have an idea" thing. Of course, there are dozens of variations on it. You don't need me to repeat all that I've personally experienced. You've heard it all, and then some. The thing is, we tend to get a little irate at hearing the same comments again and again. It ranges from "What a cushy job" to "Maybe you could write it for me." I get asked about publishers a lot. Yet very few aspiring authors ever ask me how to write a book.

I'm thinking about this today because my oldest daughter's boyfriend decided to write a book. He picked my brains a little, I muttered under my breath in slight annoyance, and then guess what?

He wrote a book. An honest-to-goodness novel.

Sometimes when I talk to people who throw out the "Maybe I should try it" thing I get irate, annoyed..whatever... We all feel that way. Our time is precious, no one understands how hard it is...yada yada. Yet there's always a voice at the back of my mind reminding me that a few years back, I was the person thinking, "I should try it." And I did. There were a few people in my corner during the process, most particularly Beth Kery, Fiona Jayde and Lacey Savage. This was all online because there's a dearth of writers in my neck of the woods. I pretty much did it on my own, and made some outstanding mistakes along the way. But I did it. I can still remember a "real writer" snorting at me and saying, "every English major wants to be a writer."

Well, yeah. But that contempt stung and I let it slow me down by years.

So this young man wrote a book. My daughter is trying to beta read it for him, and is having a hard time turning off her critical eye. Its about surfing and Los Angeles and traveling the world. Its about coming of age and tragedy and joy. He just wants a critique, not an edit, so for the first time, I offered to take a look at someone's first, unpublished manuscript. I doubt that its awful, and I hope its brilliant.

So my Sunday/Monday message is a reminder to pay it forward, particularly if you're a writer. If you can take what you know and help someone who is just beginning, go for it. Who knows what nugget of brilliance might be there in the mind of someone who just needs a little encouragement. When you hear the same "I oughta be a writer" comments, smile and give them a few moments of your time. It won't hurt, and who knows...you may be fostering greatness.

Happy Tails!
Belinda
Posted by Belinda M. at 12:33 AM No comments:

So today, we got a new washer and dryer. It took Mom  six hours to finish one load. Apparently, washers have changed quite a bit since we last bought one! I've been playing catch up on the wash all night. Its so nice to just toss the clothes in instead of hauling baskets to the laundromat.

Next I visited a new day program. It might work; I'm a little hesitant. The clients are profoundly disabled and I'm afraid a few good ripping screams from KJ might be too much. But when I told her the other program called me to pick up KJ as soon as she started screaming, she laughed. I think that's a good sign. :) Another good sign? All three teachers are avid readers...they're current favorite is 50 Shades and anything like it. I left the school while they were looking up Doms of Dark Haven on Kindle. :)

Retrieved my daughter's friend's baby from daycare and delivered it to her so she could take it to the doctor. Don't get me started on that little bit of brilliance. Our town isn't THAT big. I picked it up at 2:40, got to her office where she was waiting for me at 3:00. So...I canceled Mom's Dr. appointment for this? To give her an extra half-hour at work? Weird.

Shopped for an inexpensive printer, instead of the $30 dollar one I got the $200 dollar one. I think I was just too tired to think objectively. But hey, I think I can start it and go for a ride around the block...and the color is really nice...it might even make espresso too.


I was too weary to sleep or write, so I played with resin and bookmarks. Going to make some nice gifts for RT. Which is another subject you don't want to hear my opinion on right now.


The final delight of my day? Mom just came into the living room and told me she needs to go to the doctor again. I guess they didn't catch the full extent of her hernia in her surgery last month.


Looks like I'll be canceling my little mental health trip on Monday.


That was my Friday. How was yours?