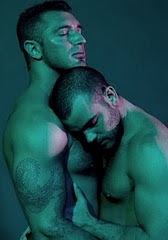 At this moment, I’m immersed in writing the sequel to a book that was very popular. The major issue that has cropped up is the fact that I’m writing about an established couple who are deeply in love. Of course, things must go wrong, our lovers must be parted, tortured and put through the ringer before they get their happy ending. In between it all, there's sex. Lot's of sex.

A sex scene is exactly that. The character’s motivation is to get his/her rocks off. The payoff is orgasm. The partner is really not that relevant. Yes, you can start a book off with a ‘sex with strangers’ scene and develop the romance from there. The thing is, one (preferably both or all) characters are in it for themselves. Regardless of how skilled and considerate the lover, the goal is self-gratification. A sex scene can be between strangers, friends, acquaintances, enemies or even committed lovers. There are no (or very few) strings attached. It might be a vampire playing with his food or someone getting cheap revenge on a lover or enemy. The thing is, it might be hot, but it ain't necessarily pretty.

Romance scenes are tricky. Some people won’t agree with me on this, but I believe that in a romance scene, the initiating lover generally has a goal that may or may not involve getting his cookies at the end of the scene. She might be seducing her partner for information. He might be charming an older lover for status. Perhaps the motivation is indeed sexual gratification or trying to make that person love them in return. The point is, there is manipulation involved. Flowers, soft lights and wine. Long walks in the park…these are some of the most amazingly sexy scenes. But one or both lovers have an agenda.

Love scenes are selfless. Our lovers are giving of themselves with no thought of what might come back to them. I have to be careful to hold back the on these scenes. Try to avoid getting sappy or oversincere. A love scene can be simple, non-sexual and even a bit clumsy. I remember reading a wonderful scene in a Marjorie Liu book where the hero and heroine were having sex. He climaxed, she didn’t. He was embarrassed and a bit humbled, and she said, “Great sex doesn’t have to end in orgasm.” The heroine's entire goal in that scene was to send her lover through the roof. In a love scene, the emotional culmination is more important than the physical release.

As I work on my current project, I have to think about my two heroes and what they want from each other. Early in the story, there is a sex scene. In fact, it’s an angry sex scene and as it progresses, the only goal of these men is to get off and go to sleep. There are a couple of love scenes that are driven by the characters’ fears and desires. They are giving of themselves for the benefit of the other. And yes…there’s some romance. Soft lights and wine will hopefully soften a few disturbing revelations for one of our men. A trip to an exotic restaurant will ease the stress of a difficult situation.

Just remember, it’s not enough to write that hot scene, you have to make it matter to the overall book.

You can vote for your choice at : http://www.theromancereviews.com/bookvote.php

I strongly encourage you to vote for your favorites in this poll, because the winning authors win a nice advertising package! Nice way to show your love! :)
Posted by Belinda M. at 9:26 PM No comments: