From Menage to Manlove and Back Again 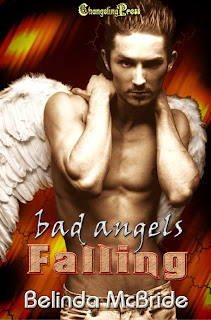 One of the questions that shows up in every interview, every chat and at every live appearance is craft related. "How do you write? Are you a plotter or apantster?"

I'm a little of both. Depending on the feel of the story, I might draft a fairly elaborate outline or simply a cast of characters and run with it. When I started Bad Angels, I had an outline, and interestingly enough, the story simply wrenched itself away and went somewhere unexpected.

Initially, this book was a bisexual menage, boys meet girl and so forth. The opening scene had Rex and Rion cooking in a diner, and Noemi coming in, drawing their attention with her tightly controlled power. But after starting, I realized that I really needed an intro to the story. Here I had a fallen angel and asidhe...how did things start for them?

I began with Rion...Kokabiel...falling from Heaven and landing in a sheep pasture in 1860's Scotland. Well, that little prologue took on a life of it's own. My planned six pages grew and grew until I knew this was a novella specifically about the boys. Yes,Anahita shows up, and there's some m/f sex, but essentially Falling is the love story of Rex and Rion.

That left me with a conundrum: should I leave the book as it stood, or move forward? The readers love Falling. The reviewers have been very kind. Do I dare mess with the chemistry? And what about Noemi? Here I'd created these two men for her...she's the Fire to their Earth and Sky. And yet Rex andRion are so beautiful on their own. I tossed the outline, closed my eyes and wrote. It takes some nerve to throw it away and trust your muse, especially after you've put in a good deal of work on the project. 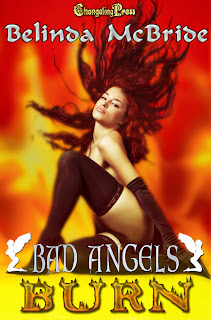 The outcome of that trust was Bad Angels: Burn. I haven't received the outrage that I expected, and as the story ends on a cliff-hanger, I did expect some angry letters. They haven't come. Readers have written to say they love it and can't wait for the final book of the trilogy.

Where does it go from here? Frankly, I'm not sure. I've got scenes in mind, but no definitive outline for the third book. In a way, I'm setting it at the back of the table, like the biggest present at the birthday party. Very soon, I'll sit down, open a blank page and wait to see happens.

Just what exactly happens when an angel goes bad?

Stripped of his voice, his memories, and his divinity, Rion Hunter falls to Earth in a fiery blaze. After crashing into a muddy sheep pasture in Scotland, the disgraced angel finds himself face-to-face with an unlikely rescuer: a sidhe-born farmer named Rex.

Rex finds himself rapidly falling for the beautiful angel, which can be risky when the object of your affection just might be psychotic. And if that isn’t enough, the men find that they’ve come to the attention of a ravenous succubus, who has developed an appetite for Scottish farmers.

Falling isn’t so bad… it’s the landing that hurts.

Following an auto accident, Rex Clark lays near death in the rocky wilderness of the Trinity Alps. Just when it appears that things can't get worse, she shows up. Anahita... the succubus. She's been his frequent companion, and the bane of his lover Rion's existence, for well over a century. But it seems that this time she's come to help.

From the frozen villages of the Inuit to the cities of America, Dr. Noemi Gastineau has seen it all. When a fallen angel shows up at the reservation clinic with an injured Sidhe, Noemi takes everything in stride. Yet within hours, she's swept into an enchanted world she never imagined existed. So why are the men so temptingly familiar? And why is she suddenly so afraid?

A fallen angel, a Sidhe, a human and a succubus. Never mind the demons, these four are about to catch fire! The question is... who will survive the burn?

I have to admit, I'm actually VERY nervous about the third book. XD I loved the first waaaaay more than I had ever expected to, but the second left me so edgy. I love Rex and Rion together so much that I'm worried about them splitting or drifting apart! Regardless, I'm eagerly awaiting the third.

Maigan, I love my characters too much to leave them without their HEA. But they have to work to get there, and take the reader along. Rex and Rion are an amazingly healthy couple, especially after a century together! LOL!

Someone asked why I ended it so abruptly, and all I can really say is that Changeling only publishes novellas, and I'd hit the wordcount limit. So it was a cliff-hanger, but not the end of the story. :)

I actually loved the ending because of the cliffhanger. A good cliffhanger is just perfection, I think. It's the thrill that makes you want to come back! I applaud you for doing one, even if it was just because you hit your word limit. ;)

Thanks! LOL! I'm a drama queen at heart and love a good cliff-hanger. As soon as I finish the two books I'm editing, I'll be back to finish this off.

I must admit, I think you're the reason I began researching ePublishing and such. I was very diehard print publishing before I read your novellas. I always dreamed of being a printed author, but now I'm quite keen to try being both. Being in print and eFormat offers so much more freedom!

Maigan, there are pros and cons to both, but I really love the e-publishing world. I love having the freedom to choose what genre I write next, and the standards are really pretty high. I've done Sci Fi, futuristic, paranormal, IR, m/m and so forth. I don't know if you can do that in print. So its a good fit for me.

Anyhow, I wish you the best of luck, I know you must be excited about getting to work on your manuscript!