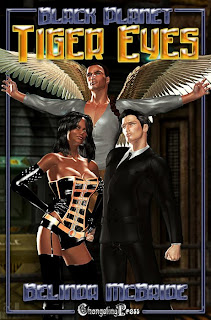 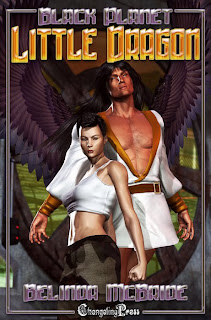 I'm so excited to announce that the three Black Planet books are going to be bundled into a collection, which will go live at Changeling Press on July 2! This has been one of my favorite series of books to write, and it was a surprise when I realized that it has been nearly two years since I wrote Tiger Eyes.

These three books are full of action and adventure, and I borrowed heavily from Japanese and Chinese culture and folklore to build the characters and the world they live in. I focused on the heroines for these books, they are the true stars of the series.

Here's a quick rundown on the three books that will be featured in the collection:

Black Planet: Dragon's Blood:
This is the story of Aiden Chen and Annie Tanaka and takes place in Wharf, a ramshackle city within a city that grew up after a great earthquake devastated the Bay Area. There's a vampiric monster on the loose, preying on nanite enhanced cage fighters. Its up to Detective Annie Tanaka and her former partner Aiden Chen to ferret out the creature and bring it to justice. Old enemies become new lovers as danger brings them new understanding of one another.

Black Planet: Tiger Eyes:
Once upon a time, Grace Chen was the most feared woman on the streets of San Francisco. Now she's a shell of that person, slowly dying of the hemo disease they call Dragon's Blood.

Lieutenant Milo Greene has little to live for other than his job. However, when the Thalian Darah Lash and Milo become lovers, a new, hopeful world opens to him. When Milo receives word that his former lover Grace is in need of rescue, Darah willingly joins him, in spite of Milo's past with the fiery woman.

Black Planet: Little Dragon
Rose Lee is seriously injured during an arrest, and finds that the only way she can continue to make payments on her beloved ship is to take a private courier job. It was supposed to be safe and easy, until she and her client stumble into the space of the dangerous, hostile Nephris. She is betrayed to the alien Commander Arad Soheil, and makes the surprising discovery that she is actually part of a risky rescue mission!