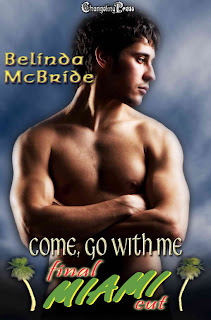 Come, Go With Me releases September 22/23 at Changeling Press! This one's a m/m romance between a middle-aged surfer and the Hawaiian demi-god that he loved and lost. Oddly enough, the book was inspired by the spritely Beach Boys song of the same title. While the song is upbeat, the lyrics are really quite sweet and winsome:

Love, love me darlin'
Come and go with me,
Please don't send me
'way beyond the sea;
I need you, darlin',
So come go with me.

Yes, I need you,
Yes, I really need you,
Please say you'll never leave me.
Well, say, you never,
Yes, you really never,
You never give me a chance.

One impossible night, two young men made love in a magical Caribbean bay, only to be separated by a violent storm. Decades later Dave Riley still remembers and grieves for a love long lost. Forever drawn to the ocean, he never stops looking for the boy named Kai.

Kai is the descendant of a powerful Polynesian deity. His nomadic life was disrupted when he became infatuated by a young human... one who slipped through his fingers and into the darkness of a tropical storm. He should have been able to move on, but Kai's heart is no longer free.

A good deed and some well-intentioned magic reunite the couple. After so many years apart, can an aging surfer and an immortal demi-god find anything other than heartbreak?


He locked the shop door and stepped out into the storm. The wind caught his hair, so Riley scraped it back, pulling the top half into a ponytail. He cast a critical eye out to the ocean. This storm hadn’t shown up on the weather reports, but would most likely blow itself out without too much havoc. The breeze was warm and damp and fine misty rain whirled through the air, caressing his cheeks. Days like this reminded him of other times and places. He took a deep breath and smiled. There was no point in grabbing an umbrella or covering his head, the wind made certain that he was damp from head to toe.

Riley started down the sidewalk; his condo was just a few blocks away from work. Over the past few years, his world had narrowed. Once his father passed, he’d taken the insurance money from the Melody and had taken over the shop, converting it from fishing and tackle to watersports and surf wear. It’d been years since he’d been sailing. He moved in a predictable pattern: from home to the beach, then on to work. Afterward, he’d hang at a local bar or go on a date with a pretty tourist. Then on home, or sometimes to a blanket somewhere on the beach.

Lately though, the girls had become women and the beach blankets had given way to upscale hotel rooms. Frankly, it surprised him that the women were still interested. He wouldn’t be seeing the sunny side of forty again. He wondered what they were looking for when they looked at him. Freedom? A carefree life in Paradise? The idea made him smile; his live was pretty much without care. No one really cared for Dave Riley.

He hopped a curb and quickly crossed the street, catching the appreciative gaze of a pair of college-age girls. They smiled and paused to talk to him, but Riley kept walking. It wasn’t till he caught sight of the young, blond surfer that he stopped. The man had blond hair kissed by the sun. His smiling face was unlined; his body was taut and muscular. When Riley stopped, the surfer stopped too. He stood, gazing at his reflection, watching it slowly age until middle-aged Riley looked back at him.

He looked around at the nearly empty street. There must be magic in the air. Either that, or Kimber had slipped something into his coffee.

A neon light flickered behind him and he turned, blinking in surprise. Had that bar been there before? The Final Cut was all weathered wood and neon on a street of plaster and palms. It was both quaint and upscale. He looked at the businesses that surrounded it; he’d spent hours in the bookshop next door. The hair salon on the other side was familiar as well. Curious, he crossed the street, wetting his feet in shallow puddles. His deck shoes squeaked with water.

Well damn. He’d seen this place before, but was certain it was in another part of town, not down here by his shop. He gripped the brass handle and pulled the door. It stuck for a moment and then gave way. The cool air escaped with a sigh, chilling his face.

It wasn’t unusual in any way. There were a few televisions mounted on the walls, sporting events playing on them. Oddly, the patrons didn’t seem to be paying attention to the televisions. They sat at the tables in clusters, or occasionally alone. He actually heard the murmur of conversation over the volume of the TV sets. A parrot squawked. He glanced at the bar, seeing the colorful bird and a bald man the size of a wall. The big bald guy lounged at the bar, dwarfing the stool he sat on. He carefully watched the room through dark glasses. When he looked directly at Riley, the image of a massive bear formed in his imagination. His skin prickled and Riley moved further into the bar.

He took a chair at an empty table, picking up the menu and scanning the room over the edge of the laminated page. Everything looked normal, but the atmosphere of the place made him a bit breathless. He glanced up as the waitress arrived at his table. He swallowed at the vision of beauty she made.

She set a napkin and a bottle of Sierra Nevada Pale Ale on his table and walked away.

“… uh… I’ll have that…” He turned in his seat, watching her walk away. He sighed deeply and lifted the bottle to his mouth.

From where he sat, he had a good view of the room as well as the doorway. He lingered over his beer, and just as he finished, the dark-haired waitress brought another. He made a point of looking up, and when he saw the lovely features, he coughed. She was a he -- and a lovely he at that! His shoulder length hair hung in a ponytail, and his pouty lips gleamed as though they'd been glossed. A short apron covered his shorts, and when he walked away, his ass swayed provocatively. Riley grinned. He was exactly his type of woman, but not at all his type of man.

Right as it registered that he was growing hungry, his sexbomb server brought a plate of sliders and another beer. Riley chuckled and started in on his food, watching the other patrons as he ate. There were a couple familiar faces here and there, but mostly, it just looked like a normal neighborhood bar. There was a beautiful woman in the corner, turning over cards in an elaborate tarot display. Her white clothing gleamed against her dark skin. A pair of rough looking men leaned over their table, talking quietly. At another table, a couple sat, clearly flirting. The man picked up the woman’s hand, running his lips over her wrist.

Vampires and shifters and Fae, oh my!

He laughed at himself. OK, so Coco and her man were not your run of the mill people. Same for Genie, and even Kimber. But vamps? No way.

Nevertheless, he’d be getting out of this place before it got fully dark. Those two looked hungry.

He finished his food and then looked out the window facing the ocean. Sunset was rapidly approaching, and the water looked grey and angry. In the distance, lightning forked through the sky. No doubt there were still a few die-hards out there, making the most of the weather. Once upon a time, he’d have been one of them.

He smiled, shook his head and looked around for his server. It was time to go. To his surprise, the lovely creature was nowhere in sight. Odd, since he’d anticipated every one of Riley’s requests long before they came. He stood and dug out his wallet, pulling a pair of twenties out. Before the cash was out of his wallet, wind whipped through the room. He looked up, expecting to see the front door open, but nobody was there. That’s when he remembered…

The bar had no windows.

He sat back down… hard.

Aw...thanks! Its a cute series and I have fun with that world.:)