For Day Five, I'm giving away a print copy of Blacque/Bleu. :) You know the drill, leave a comment for a chance to win. 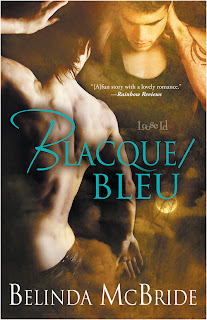 I am a very spoiled, self-indulgent writer. I like to write what I feel like writing, rather than go by calls for submission or requests from my editor or publisher. So when Loose Id put out a call for Coming Out, 2010, I sort of blew it off. I had no ideas on a coming out theme. Its kind of angsty and a little hard on the heart to write. Besides, I tend to write more paranormal and fantasy, and in my magic worlds, sexuality is just another facet of a character's personality. Besides, most of my characters are either bisexual or pansexual. Coming out is never really an issue.

But, I remember one Sunday that Treva Harte put a note on Facebook, saying that proposals were closing on Wednesday. I left a comment saying that I wished I could have come up with something, but just had no ideas. Treva responded by saying, "You have three days to send me a proposal."

I laid in bed that night letting ideas and characters run through my head, keeping me up all night. By Monday, I had remembered my little Arcada universe, I'd written a couple shorts over at Changeling Press that were set in this magical town. And I remembered a brief scenario I'd sketched and abandoned: A vampire with insomnia. It was meant to be humorous but in Arcada, with a coming out theme, it became tragic. I saw a photo that set the tone and the title of the book; it was a black, blue and white image of two powerful men in an embrace, one resting his forehead on the other man's chest. 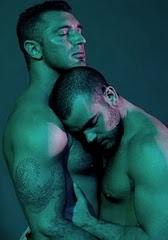 Oliver Bleu came to me quickly; he was a fusion of my sweet, charming Grandpa Shields and the poet Robert Graves, who wrote an eloquent history of World War I. Oliver was a dash of Old World romance and a pinch of ennui, all mixed in with a strain of libertine. When I saw a photo of the model Donny Lewis, Oliver suddenly came to life.

For his hero Lukas Blacque, I wanted a butch, blue collar character. Someone strong, taciturn and a little frightening. I imagined the actor Dominic Purcell and knew Blacque was a shifter. I was worried, I shy away from tropes like a vampire/werewolf pairing, but in this case, the two heroes rapidly grew and shaped the story around them.

Instead of one character coming out about his sexuality, every character in the book reveals a deeply kept secret. Some people say that Lukas Blacque's outing came as a bit of an anti-climax, and it was meant to be that way. Every character has a secret that comes out; Dane Blacque abandoned his mate, April Bleu was turned by Oliver's maker. Dierdre is afraid having children will ruin her career.

Considering Blacque/Bleu was nearly an assignment, I think it turned out pretty well. In some ways the book is deeply personal; my favorite music is mentioned, Oliver wears Dickies work clothes and Lukas wears steel-toed boots and cleans his hands with Goop. :) These are memories of growing up around my father, who was a truck driver and mechanic. It was fun drawing on the familiar for a paranormal romance.

Blacque and Bleu are two characters that lingered on with me. Even when the book was finished and I'd moved on to other projects, they flit through my mind and I know I'm not finished with them. The show up in Silver/Steel and I know what's coming next for them. There will be some trials and pain, but in the end, they will know joy. Because they've earned it. :)

Thanks so much for the insight into the book. I would love a print copy form y collection.
debby236 at gmail dot com

It's refreshing to see an author who writes what they feel instead of what will sell books. Kudos and keep doing what you do so well.

Pick me, pick me! LOL
To have my favorite book and have it signed by a wonderful Author.
Would be the best Birthday present ever!! <3.
This was my first book from you.
So fell in love with it. <3
So glad you took the challenge.
Loved,loved,loved Blacque/Bleu!
~Teresa~
dragonwolfe42@hotmail.com

Thank you for sharing how Blacque and Blue were created. Their story is so Beautiful! By the way I just finished Silver/Steel and I loved their glimpses in Dylan and Travis' story, how they shows their love...
Thank you!
Cinzia
ciri.labo@gmail.com

I LOVE hearing about the story behind the story! I ssssooo want to read this and thank you for the giveaway!

I think this is why I read M/M because the authors do take chances with their characters.

Hi Belinda!
I so fell in love with Blaque & Bleu. The story drew me in and kept me immersed in their world. It's a beautiful story, and I have it in my forever keepr collection to be read again and again...*S* Silver/Steel is next on my gotta have buy list and I can't wait to read it...*S*
Thank you for sharing your creation of these great MC's, and I look forward to even more of your stories.

This book is Amazing. It's one of my read over and over again books and every time I read it I see something new.

Ah, I remember Goop! When you're a kid, it's pretty fun to play with. :) My dad was a mechanic too.

I am sooo in for this one!

I would love to read this book.
goaliemom0049 (at) gmail.com

I love this book! Count me in please! Thanks,
chellebee66(at)gmail(dot)com

No need to include me for this, but what a compelling premise--every time I read the blurb, I feel the same way, Belinda! This one's a winner :)