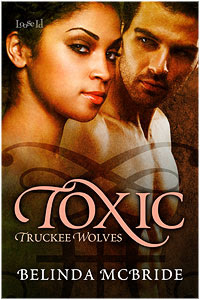 
Blurb
There are three things that Dr. Briony Theale loves. Her job as a veterinarian, a good bar of rich, dark chocolate, and Rico, the ranger in charge of the Wildlife Rescue center. When a casual dinner with Rico turns surprisingly intimate, Briony realizes that she might just have a chance with him after all, if only she could lose a few pounds. It’s the ultimate sacrifice, but Briony goes cold turkey, and swears off chocolate forever.
Rico Montgomery fell hard for Briony the first time he set eyes on the curvy little doctor. Her rich brown hair and cocoa skin trigger cravings that he can barely control, and her fragrance is like the sweetest, richest chocolate he’s ever scented in his life. That’s a bad thing for Rico, because to a werewolf like him, chocolate is literally a toxin. After his pack warns him off the very human doctor, Rico finds himself even more drawn to Briony.
Rico can’t live with it, and Briony can’t live without it. And when a certain wandering wolf finds a bag of chocolate in the trash near Briony’s clinic, these two will find out just how toxic love can be.

This is a substantially expanded and revised version of the short story Sex and Chocolate: Toxic which was previously published.

“Why’d you decide to be a vet?” He sucked a bit of sauce from his knuckle, noting how her eyes followed the movement.
“I just love animals, and they seem to like me back. I’m good at science, so it seemed to be the right field for me. And I do love it.” She finished her second piece, and this time he let it go. He’d send her home with leftovers. “How did you become a ranger?”
“Oh, I love animals, and I seem to be pretty good at science…” The corners of her eyes crinkled in laughter. “I’m a biologist, and most of what I do is in the field. So while I’m assigned to Rescue, I’m also in charge of monitoring raptors in this region. It ties in closely to what we do here. Luckily I have a good volunteer coordinator, because sometimes I spend days up in the mountains. Can’t think of a better job.”
She nodded, and he could sense she was getting ready to leave. Quickly he began gathering the leftovers and plates. “Dessert? I have ice cream.” He peeked into the freezer and pulled out a carton. “It’s that type with three flavors.”
“Neapolitan!” She laughed and rose to help him clean up. “Okay, but just a little. I’ll take a scoop from the chocolate side.”
They ate while standing. Rico leaned against the sink, letting the cool taste of strawberry melt over his tongue. He’d rather have chocolate, but that would be a bad idea. A very bad idea.
Briony clearly savored the flavors as she ate. “When I was a kid, my mom would buy this kind of ice cream. My little brother would eat the strawberry, and I’d eat the chocolate.”
“Leaving the vanilla behind.”
“Mom would get so mad!”
“Well, I can have the vanilla and the strawberry, but I have to leave the chocolate alone.”
“Don’t you like chocolate? I can’t imagine anyone not liking chocolate.”
He smiled at her expression of sympathy. “I love chocolate, but it doesn’t like me. It makes me a bit sick.”
“Wow. I can’t imagine…” She stared down at her bowl, dragging her spoon through the melted remains of the ice cream.
“There’s one way I can have chocolate.”
She looked at him, tilting her head just a bit. “How?”
“Like this.” Rico bent down and kissed her lightly, letting the tip of his tongue catch the flavor from her parted lips. He moved back slightly and smiled at her surprised expression. “Was that okay?”
She blinked and cleared her throat a little. The warm scent of chocolate filled the air, and Rico’s body responded, going hard and tight with need. “Uh…yeah… Yes.”
Taking that as permission, he rested the tips of his fingers on her cheek, knowing they were chilled from the ice cream bowl. Her eyes fluttered closed, her dark lashes making a crescent against the curve of her cheek. Slowly he kissed her again, drawing it out this time. He ran his fingers into the silky curls of her hair, then supported the back of her head as he took the kiss deeper. He tasted her, absorbing the essence of chocolate from her mouth, from her very skin. He shivered at the sensations that raced through his body.
Rico knew exactly when to break the kiss. “Nice,” he whispered in her ear, then stood up straight so she could move away. He trailed his fingers from her hair over her ear and down to her jaw. Her skin was fine and soft. “You taste so sweet. Chocolate kisses.”
He was about to kiss her again when she blinked and straightened. “Chocolate… Oh! I really need to leave.”
Rico stifled his disappointment, taking the bowl she still held.
“I’m sorry. I really do need to go. My night help can’t stay long, and I’ve got a dog in for chocolate toxicosis. I’ll need to stay at the clinic tonight.”
Rico turned to the sink, not liking that idea at all. He’d had girlfriends, some serious, but this protective streak surprised him. It took him a moment to regain control of his voice. “Will you be safe there alone?” He watched her reflection in the little window over the counter.
She laughed, and he was stunned by the dimples and the sudden spark of humor in her brown eyes. “Perfectly safe. I’ve got excellent security plus a nice overnight room for the weekend staff. In fact, when I first moved to town, I lived in the clinic until I found my house.”
He turned and leaned against the sink. “Just how good is your security?” He lifted a brow. He wasn’t an expert but knew people who were. The average security installation was little more than an illusion of safety.
“It’s the best.” She smiled up at him. “Designed by my own mother.”
“Seriously?”
“Seriously. That’s what she does for a living; she’s a security consultant. Former military.”
Well, that didn’t mean much either as far as Rico was concerned. Somehow he’d wrangle Kurt and Ethan into checking the place out. For tonight, though, he’d make certain she was safe.
He sighed, following as she gathered her things. “Okay, Bree, but if you need anything at all, don’t hesitate to call. Any time.”
“Oh, I couldn’t trouble you, Rico!”
“No trouble. Honest.” He grinned. “If the big bad wolf comes knocking at the door, I’m the man to call!”
She laughed in delight. “There aren’t any wolves in California! You told me that months ago.”
“You’re right. There aren’t any wolves in California. At least, not the four-legged kind. Not yet.”

Oh my, I'm going to have to check this book out!
Thanks for posting the excerpt Belinda!
Qwillia