How Did She Come Up With That? Kate Pearce 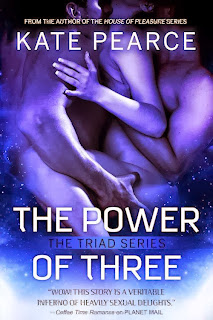 I’ve always been a big Star Trek and Star Wars fan and spent many hours as a kid hiding behind the sofa watching Dr. Who, so it seemed natural to think about writing an erotic Science Fiction romance at some point. I also knew that it wasn’t a wildly popular sub-genre, so I kept most of the ideas humming around on the back boiler of my imagination for years.
Then self-publishing emerged as an option, and I thought it would be a great to finally get some of those characters out of my head and down onto the page. Ash, Esca and Soreya from The Power of Three, were all pretty much formed in my imagination, so it wasn’t too hard to write about them, although like any story, the way you see it in your head is never quite how it turns out. J
I didn’t want to go overboard with the world building either as for me; these books are more fun reads with way less dark and angsty characters than in my historicals. Sometimes it’s nice to avoid the torment and simply write a good, but complicated m/m/f love story. That sexual combination is my favorite and throwing in the Telepathic Fated Mate angle just makes me a happy writer.
The next book in the Triad series has also been in my head for years, so I’m looking forward to writing that one next year, too. I need space for some new stuff!
Kate Pearce
http://www.katepearce.com 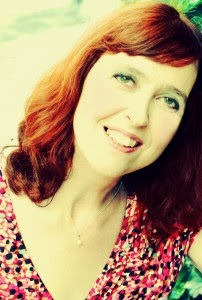 Kate Pearce was born into a large family of girls in England, and spent much of her childhood living very happily in a dream world. Despite being told that she really needed to ‘get with the program’, she graduated from the University College of Wales with an honors degree in history.
After graduation, real life did intervene and she ended up working in finance which was not the greatest career choice for a would-be writer!
A move to the USA finally allowed her to fulfill her dreams and sit down and write that novel. Along with being a voracious reader, Kate loves trail riding with her family, ‘western style’ in the regional parks of Northern California
Kate writes in several different romance sub-genres under different names. She is a member of RWA and is published by Kensington Aphrodisia, Ellora’s Cave and Virgin Black Lace/Cheek.