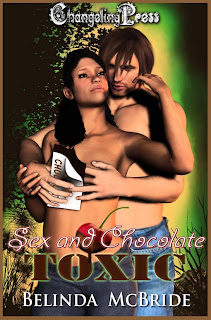 Toxic was a bit of a family project. I had the kernel of an idea for this story, but just couldn't flesh it out. When I was batting around ideas one day, I blurted out that I'd love to have Rico the werewolf wake up in Dr. Briony Theale's vet clinic, naked and trapped in a dog crate. From there, we got silly, exchanging wild ideas (most of which never made it to the manuscript) and just cracking of over the potential disaster of a werewolf dating a vet.

In the end, the characters came to life and the story actually kick-started a series idea that I'd been playing with for nearly a year. Will there be more Truckee Wolves? Stay tuned!

There are three things that Dr. Briony Theale loves. Her job as a veterinarian, a good bar of rich, dark chocolate, and Rico, the new ranger in charge of the Wildlife Rescue center. When a casual dinner with the mysterious Rico turns surprisingly intimate, Briony realizes that she might just have a chance with him after all, if only she could lose a few pounds. It’s the ultimate sacrifice, but Briony goes cold turkey, and swears off chocolate forever.

Rico Montgomery fell hard for Briony the first time he set eyes on the curvy little doctor. Her brown hair and cocoa skin trigger cravings that he can barely control, and her fragrance is like the sweetest, richest chocolate he’s ever scented in his life. That’s a bad thing for Rico, because to a werewolf like him, chocolate is literally a toxin.

Rico can’t live with it, and Briony can’t live without it. And when a certain wandering wolf finds a bag of chocolate in the trash near Briony’s clinic, these two will find out just how toxic love can be.

“Dr. Briony, you have a call on line two.” Amy gave an impish smile. “It’s Ranger Rick from the Wildlife Rescue.” She waggled a pale blonde brow.

“Well, he’s a ranger and looks just fine in that uniform.”

That he did. Briony’s belly tightened at the mention of his name. Butterflies danced alongside the slight chocolate euphoria she was experiencing. “I’ll take it in my office.”

“Sure you will. Are you guys having phone sex yet?”

God, why did she keep the girl around? It wasn’t bad enough that Amy was a smart-mouthed kid, but at the age of nineteen, she was the poster child for the perfect beach blonde. She was tall and slender with blue eyes and golden hair.

Briony was brown. She didn’t even have the satisfaction of saying she was African American or Latino. She lived as a chocolate woman in a vanilla community. Sometimes Bree felt like the ultimate outsider, an eclectic mix of races that left her with brown skin, brown eyes, and even brown hair. She certainly didn’t have a bikini body, but she didn’t let that keep her away from the water. Part of the reason she’d moved to ’s Gold Country was the abundant outdoor life.

In the summers she spent every spare moment at the crystalline lakes and rivers, kayaking and swimming. In the winters, she explored the back country on her cross country skis. She’d grown up without money and had still managed to graduate from UC Davis Veterinary School. When Briony decided she wanted something, she gathered up her courage and went after it.

Well, all except for the man waiting for her to answer his call. She’d never found the nerve to pursue him.

Rico Montgomery. The first time she’d seen him, she’d nearly had a spontaneous orgasm. Her body wanted to have his children. She’d contemplated tripping him and beating him to the floor.

He was six feet two inches of dark-haired, gray-eyed, chiseled beefcake, and this beefcake had brains. He wore his tan uniform shirt to perfection, and his Smokey the Bear hat threw her into the most delicious fantasies of her life. But face-to-face with the man, she was a wreck.

She stared down at the blinking light on the phone. “I am woman, hear me roar.” She took a deep breath. Her fingers trembled as she lifted the handset. “This is Dr. Theale.”

“Unhh… hello, Rico.” Oh, that was brilliant. Just brilliant. “What can I do for you today?” Maybe a full body massage? Or hell, let’s just go for broke… a blow job? She shivered, imagining wrapping her mouth around his cock. Just for fun, she’d dribble chocolate sauce over it first. In fact, she’d like to cast that phallus of his in chocolate. That way, she could have the best of both worlds…

Briony’s head dropped to the desk, her face hot with embarrassment. This was how she acted around the man over the phone! The idea of seeing him in person just blew her dignity out the window.

“Well, I wanted to see if you could make a house call today. I’ve got an injured falcon that’s just come in.”

She could almost hear the smile in his voice. Rico Montgomery was a walking wet dream of a man. There was no doubt in her mind he knew exactly what she was thinking. He had to be accustomed to women losing their cool around him.

“Let me see, I’m short-handed today.” Briony booted up her scheduling calendar for the day. “I’m booked pretty solid for the next couple hours, but I can come out right after my last appointment… say 5:30?”

“That’d be awesome. And since it’s on your own time, dinner’s on me tonight.”

Dinner on Rico. She imagined licking gravy from his navel and stifled a giggle. “Oh, really… that’s okay…” Her chocolate-filled stomach lurched. Briony wasn’t sure if it was nausea, nerves or arousal.

Briony stood and paced a bit, dragging the phone cord across her cluttered desk. A pile of books crashed to the floor. “Damn! Uh… sorry, just dropped something.”

His laugh was as rich as melted chocolate in her ear. “Is pizza okay? I usually do an all meat combo. I’m a carnivore, you know.”

They made their goodbyes and Briony put the phone back into its base on her desk.

“Hot date with the ranger?” Amy was leaning against the doorjamb.

“No, an injured falcon. He’s working late too, so we’re just…”

OMG I love the premise for this lol.

Thanks! It's pretty cute, and like I said, some pretty wild things happened to poor Rico the wolf. Thankfully, they never made it to the final copy! LOL!