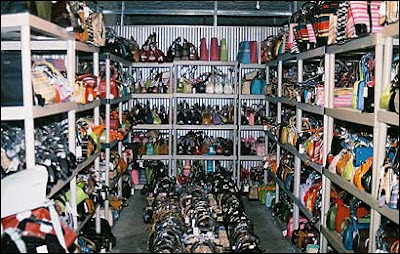 I got to thinking today...about some of the more stupid things I've done in my life. Some were stupid, harmless fun, some were flat-out stupid, dangerous things. For example, sliding through a culvert in a fast-moving irrigation canal, when everyone around me was drunk. (I wasn't drunk, I was just stupid.) Yeah, rural Utah. Not much to do.

Some of the stupid things I've done literally chill my skin, and I'm going to share one now.

Some people know that my degree is in History. My specific specialty is Public History, which trained me to get out in the field quite a lot. My minor was Cultural Anthropology. Again, that field puts you out among people, sometimes not always in the best places. I guess what I'm trying to say is that I often have no compunction about going someplace that I don't belong, primarily out of curiosity.

I show dogs. Every few years, I gird up my loins (Hi D!) and head to Manhattan to go to Westminster Kennel Club. The second time I went, my plane was delayed in Chicago for 3 days, and I missed seeing a dog that I bred on her day to show. In fact, I got there in time to have one day of shopping before Best In Show. My friend who will go by the name "Jane" suggested we go purse shopping. You see, all the dog show people go purse and scarf shopping when in Manhattan. It's just the thing to do. Heck if I know why, I'm no fashionista. Nevertheless, we went to Chinatown to go shopping.

Well, my friend Jane is with the Sheriff's department in her home county, so I didn't think we were going to be doing anything particularly off-track. I am a total goodie-two-shoes at heart. So when we went wandering into Chinatown, the adventure that we would have was the last thing from my mind. I thought it'd be like San Francisco, brimming with legal knock-offs, like Louis Vuitbone dog logo wallets, and so forth. But that's not what we found.

We hit a corner, and a little Chinese lady came up, tapped on Barb's Coach purse and said, "Cooche...Louis Vuitton..." and we followed her. We didn't follow her to a store, but to a back alley, where she gave a series of knocks on a cleverly hidden door. Inside, we wound through a maze of little corridors, up stairs and into little tiny cubbies. Inside those little rooms were mounds and mounds of purses, wallets, umbrellas and so forth. Louis, Coach, Prada...you name it, it was there. The bulk of what we saw there that day were counterfeits, but salted among the dross were some real items. I was later told that they were seconds that were to be destroyed, but were sold off the back of the truck.

After we visited the first site, it became an obsession. I'm not an accessories fiend, but we went from place to place, exploring the underbelly of Chinatown. We went into basements, behind false walls in stores, and into abandoned, boarded store-fronts. At one place, we climbed several flights of stairs, and our procurer got really angry at me when I snuck off to peek into a little factory, where dozens of people were busy sewing away on designer sportswear. I recall that at that location, the glue was so fresh on the purses that I came away a little dizzy.

The dubious highlight of the day was when we followed someone into the boarded up front of a store; it was painted black, and we slipped between two loose boards and went into this dark hive of silent corridors. There were several of us once we got to the tiny room, a wealthy couple, (I may not know fashion, but I do know gemstones) a mother and daughter, and a young couple. Midway through our browsing, a young man came to the door, whispered urgently to the man who was watching the room. They ran away, and very soon our original guy returned. He closed the door, locked us in and told us to be very, very quiet. For awhile, the lights were off. We waited in that locked room for fifteen minutes, but it seemed like hours. When he returned and unlocked the room, he quickly hustled us back out the entrance, and then sent us on our way one or two at a time.

To this day, I don't know if they were hiding from cops, but I have a suspicion these operations are Triad operated, and we could very well have found ourselves in a truly nasty situation between competing "vendors." As we left, Jane shook her head. "If I get arrested, I'll lose my job." The realization of just how dangerous this industry really is hit me like a ton of bricks. By buying fake and stolen merchendise, we were breaking the law just as surely as the vendors.

I personally know people who have tangled with the Triads. One man uprooted his entire family and fled Canton, coming to the US for safety. In Hong Kong, I know actors who have been forced into projects that they don't want to participate in. I once worked on a project with a few Hong Kong based celebrities, and was warned that the bad guys might contact me for a shake-down. Honestly, I cannot explain my naivete in this instance, except to say that I have that stupid desire to see what's under the surface of things.

I haven't been to Manhattan since that time, but if I did, I'd probably visit Chinatown. New York Chinatown is just amazing. And if someone approaches me saying, "Louis Vuitton," would I follow?

Probably. That's just the way I am. Is visiting these places illegal? I have no idea, but the things that I saw that day were stunning. I have no doubt that brothels also operated out of these covert businesses, not to mention a drug industry.

Would I buy anything? Are you kidding? At $50 for a knock-off purse? I buy my purses at the thrift store...no possible way!
Posted by Belinda M. at 9:19 PM

Well, now, you can't complain if people pirate your books! Just call me Jiminey Cricket. I'll be serving as your conscience today.

LOL! I was along for the adventure! At the time, I seriously had no idea that it was so...err...dangerous.

Last time I bought a purse it was for $7.00 when Mervyns went out of business! You seriously think I'm going to buy a piece of crap for $50?

(I can do that in Hong Kong night market without getting busted!)

Haha, nah, I know you're too smart to do that, just razzing you a little bit. :)

What gets me is how gawd-awful ugly some of those purses are, and still people are willing to spend a fortune on them. Go figure.

By the way, it sucks that Mervyn's closed down. Lost a good stop-and-pee location in Marysville!

LOL! I'm sure Mervyns was worth more than a stop n pee!
I dated a guy that pointed out that when you wear/carry designer wear, you're simply PAYING them to advertise their brand. It's always rubbed me wring since.

WOW... yeah I probably would have gone too just because I am that curious as well.

I have a Chanel handbag one of my dance students gave me as a gift... I have no idea if it fell off a truck somewhere, and I hope I never get in trouble for "receiving stolen goods". LOL