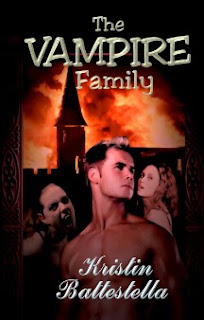 Forget Spring and sunshine and warm weather, for vampires know no October bounds! Sure there's plenty of teeny bopper blood and sucking goodness, but what about some gen-u-ine scares of the fang variety? Fear not! The Vampire Family is now available in paperback!

Blending horror, dark fantasy, and paranormal romance; the trials and tribulations of The Vampire Family are tough to pigeon hole. There's plenty of historical action, contemporary horror, ill fated romance, and dastardly vampire covens to span the novel's journey from 12th century Britain to the 21st century and beyond...

Sadistic? Check. Domination? Check. Happiness? Not for all. Antonio Welshire accepts the mysterious Mestiphles' offer for vampiric power, but fails to consider that not all in his family desires evil. Daughter Victoria revels in the debauchery, but eldest daughter Samantha loathes the darkness. Enemies are in no short supply when the family turns to darkness. Charismatic rebel Gaston turns up to rival for Antonio's power; the vampire lover Jean can destroy them once and for all, and henchwoman Lilith seeks to supplant Antonio as Mestiphles' favorite. Who will be declared the victor? And in the end, though they've survived coven wars and persecutions since the 12th century, can The Vampire Family survive each other? Killing his abusive parents isn't enough for Antonio Welshire. Rape and death follow him through his youth in the 12th Century-until a stranger named Mestiphles give Antonio unimaginable vampire powers. Fearful yet captivated by his allure, Antonio's adopted sisters Ann and Elizabeth share this gift with him and their children-Victoria, James, Samantha, and Stephen. Antonio is a cruel ruler , and after his defeat of the young rebel Gaston, Antonio struggles with Lilith-another magical pet also created by Mestiphles. Antonio's vampire family grows over the centuries, each vampire loving and losing vampire fledglings over time. Wars, persecutions come adn go, but the family's troubles always stem from within. Elizabeth may be his wife, but Ann supplants her as Antonio's mistress. By the 20th century, Elizabeth has found love again-unfortunately her fledgling Jean share's Samantha's disdain for the vampire life. Will The Vampire Family self destruct before the 21st Century?


Now, we need something juicy!

“Catherine?” Antonio’s shadowy figure stood at her door. The tiny flame shortened in a clump of wax as the maid looked up.
“Yes, sir?” She set down her quill. “You sound different, sir. Are you ill?”
“Yes.” He stepped toward her. “I need your help.”
The dim light shined in his face. He couldn’t see. His eyes felt bloodshot, and his hands seemed pale as the candle flickered. He put his hands on Catherine’s arms. She felt warm to his cold touch. Sharp teeth cut the inside of his lips.
Antonio’s voice trembled. His hands shook. “I need your help.”
“Of course, sir.” She put her arms on his, but Antonio shook and felt the muscles of his forearm clench. “What can I do? Here, sit down.”
His arms came around her waist. Antonio heard her blood rush and saw her face flush. He put his head down on her chest. She trembled, but held Antonio’s head.
“Such overwhelming!” He spoke more to himself than Catherine. His words and hot breath were muffled against her. “Now I know what Mestiphles meant. I know what to do. I need to do it. I have to have it!”
“I’ll get some water.” Catherine was about to get up, but Antonio clenched his hands tighter around her.
“No,” he said hoarsely. His nails dug into her sides, and she winced. Antonio relaxed his grip, and she allowed his hands to roam. He unlaced her dressing gown. His hands stopped shaking, and bewitched, Catherine gave him total control. He pulled the loosened gown off her shoulders and swept Catherine to her feet in one swift motion. Yes, he knew she was captivated and paralyzed. He could be so frightening, yet masculine and desirable. Antonio put his head to her neck and bit the pumping jugular. She flinched, but her blood flowed into Antonio’s mouth. The short life drain was ecstatic, but soon grew empty. Her life was now in him.Antonio let Catherine’s limp body fall to the bed. He had her, and now he wanted more.


Thirsty for more? Here's some linkage! You can check out our ebook edition from our publisher Eternal Press or the Fictionwise/Barnes and Noble Storefront'


We're also available at Books on Board, All Romance E books, and E Reader, too. You can use the cool Look Inside Feature and shop for our Paperback on Amazon.


I know, I know, you can't get enough spooky in this sunshiny and green weather! You can stay up to date on The Vampire Family and the forthcoming sequel by hanging our at The Kristin Battestella Yahoo Group. You can also choose the subscribe or friend and follow options at our Vampy Blog. News, excerpts, interviews, fun quizzes, and periodic contests! It's so scary its good.


For a complete list of our press and character blogs, check out The Vampire Family at my official website, aptly named For Flying Servants Only....... Previously, we've taken time out at Fallen Angel Reviews, Night Owl Romance, Red Roses for Authors, and The Pen and The Muse, among others.


Before I go, I want to send along some pleasant thoughts to all the ladies who love a good old naughty boy vampire! Some of them are good, and some of them are very, very bad. None the less, these men just can't wait to sink their teeth into you. So sleep tight and Meet The Men of The Vampire Family!


Antonio- The Welshire Family Patriarch is determined to control his family and rule his vampire coven without incident. His numerous children often make this difficult, as well as Antonio’s affairs with Ann-his wife’s sister.

Mestiphles- Powerful and mysterious, Mestiphles lures Antonio into the immortality of vampirism-but he is ever watchful, and often displeased with Antonio’s rule. From time to time he sends his henchwoman Lilith to keep Antonio under control.

James- Antonio’s youngest son has little time or desire for his vampirism and instead interests himself in human affairs, especially wars. James has only one fledgling, Catrina.

Stephen- Antonio’s elder son gives no rhyme or reason for his lifestyle-which is little more than fun and thrills. He keeps two steady companions, Jessica and Pamela.

Gaston- This young disenchanted rebel leader tries to destroy Antonio’s coven in its infancy, but his partner Sarah joins The Welshires.

Jean- One of the rare vampires made by Antonio’s wife Elizabeth, Jean seeks to end his vampiric curse after becoming romantically involved with Antonio’s daughter Samantha.

Theodore-Turned by Antonio’s daughter Victoria in the 19th century, Theodore uses his extended lifetime to consume knowledge and wealth-skills often manipulated by his maker.

Rain-Also made by Victoria, Rain grows tired of her love him and leave him ways and aids Lilith in her attempt to destroy the Welshires.

Eric- Not only does Eric almost always butts heads with Antonio over his love affairs with his maker Ann, but Eric is more of a father figure to Stephen than his real father would like.

Angelo-Another of Victoria’s henchman, only Antonio’s young wit and sarcasms make Angelo not so easily deceived by Antonio’s daughter.

Eddie- Catrina’s fledgling keeps her company when James is on duty, but he also pals with Stephen, learning the hedonistic vampire arts.

Adam- Jessica’s fledgling is a master swordsmen and best friend to James. Once becoming a vampire, Adam swears loyalty to Antonio and battles Lilith and her cohorts.

Caine-Victoria’s last fledgling lived his human life outside the law and treats his vampiric life no differently. He loves his maker well enough, but Caine follows Samantha’s rule, much to Victoria’s chagrin.

A big thanks to Belinda and her big Halloween shout out this month! You can catch me up next at May 12 at the Eternal Press Author's Blog. For a little bit of nonfiction and horror critiques from Yours Truly, check out my review blog I Think, Therefore I Review. There I rant about horror books, movies, television, and music-in addition to more quizzes and fanlistings to keep things interesting!

Up next writing wise is a horror short story I've been going back and forth on called The Haberdasher. Samples of this and other short stories are available on the Yahoo Group. I've also done some editing work on my pal Leigh Wood's sf erotica On The Way To New Isosceles. She's also taking on some guest days at my livejournal and the yahoo loop.

Sex and vampires! Oh my, I think I've over stayed my welcome!
Posted by Belinda M. at 12:14 AM

Great post! The Vampire Family sounds really good. I will have get this one to read more of it.

I just love big families and the Vampire Family sounds just perfect. Can't wait to read about each and every person. Maybe there will be more family added. Do I hear a series of at least 25 books?

Hi Becky and Ore! Thanks for taking the time out to comment.

I'm glad The Vampire Family is tangy-or should I say fangy?- enough for you!

25 books? Wow. It would be nice to have that kind of audience! Currently I'm working on a short story collection of first person accounts from the gang. As to thoughts of more magic, we shall see!